The Edge Hill Light Railway was formed to exploit the large ironstone reserves which lay just under the surface on the Northants / Oxfordshire border at a time when the enormous demands of Word War 1 were really making themselves felt. Initially promoted as the Edge Hill District Minerals Light Railways, the driving force behind the proposal seems to have been the proprietors of the Stratford on Avon and Midland Junction Railway who saw it as a means of increasing traffic on their railway. These proprietors were well connected City operators who specialised in increasing the value of railways before selling them on.

The initial directors of the light railway were also the directors of two related Black Country iron companies, T & I Bradley Ltd. of Bilston and T & I Bradley & Son of Darlaston. Harry Willmott, the SMJR Chairman, later became chairman and Arthur E Diggings of the SMJR was its secretary and subsequent traffic manager. The promoters acquired mineral rights to over 600 acres around Edge Hill. Unusually, instead of going for a simple mineral railway they opted for a public light railway and appointed Holman F Stephens, recently released from his army commitments, as engineer. This use of light railway powers for an essentially mineral railway has echoes of the still far from completed East Kent Light for which Stephens had been responsible since 1910. Stephens had previously been briefly connected with the Willmotts and Herbert on the Isle of Wight Central before being ousted as engineer by Willmott's son Russell, a portent of things to come.

Stephens's office in Tonbridge proceeded to draw up plans and initially it seemed that he wished to tackle the principal problem of building the railway, that of surmounting the 300 foot high scarp, by starting at Fenny Compton and proceeding diagonally up the slope to lessen the gradients, a proceeding planned for several of his projects notably the Headcorn – Maidstone line. However this was soon scotched on the grounds of cost, and probably more importantly that the railway could connect directly not only with the SMJ but also the main GWR line. With hindsight this decision was the Achilles heal of the enterprise for it increased operating costs by imposing an incline that was to prove a literally disastrous engineering error. 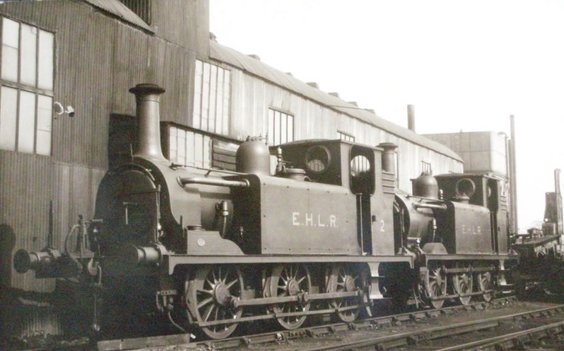 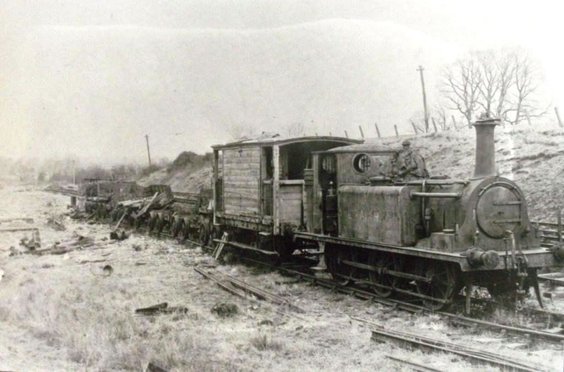 The resulting proposal was a most unlikely railway for Stephens; 11¼ miles of railway, including a triangular junction with the SMJR at Burton Dassett and after two miles a rope-worked incline followed by three branches serving different parts of the ore field. These branches stretched well south into the ironstone field into an area later successfully exploited by a more conventional mineral line, the Oxfordshire Ironstone Quarries at Wroxton, stretching westward from the GWR near Banbury and promoted at the same time but built quickly in 1917/18.

In August 1917 an application for a Light Railway Order was submitted. Stephens gave evidence at a public enquiry by the Light Railway Commissioners, held at Banbury town hall on 8 and 16 November 1917. In view of objections from landowners and the local authorities, the proposals were scaled down to a total of 5 ½ miles, and it was agreed to construct bridges instead of a number of level crossings, again very unlike Stephens but not unprofitable as the excavations were through exploitable ironstone.

The SMJR would have running powers from Burton Dassett to the foot of a cable-worked incline (just over two miles) and passengers might be carried over this portion. A high-level line from the summit of the incline to the quarries would be for mineral traffic only. The maximum permitted speed was 12mph on both parts of the line. The Light Railway Order was finally approved on 17 July 1918.

Once the Light Railway Order had been obtained and probably early in 1919, Colonel Stephens seems to have stood down as engineer in favour of Russell Willmott and apparently ceased all connections. Perhaps the promoters were merely using his skills with the procedures of obtaining an LRO rather than wishing to take advantage of his management expertise, although many see his influence in the acquisition of the two Terrier engines (which arrived in 1919 and 1920) and the only other mainline rolling stock, two ex GER ex-Army brake vans.

The Edge Hill had no engine shed, though strangely there was a turntable at the junction, and the engines were serviced and largely kept at the SMJR's Stratford-upon-Avon locomotive shed, under a 'gentlemen's agreement', facilitated by the two companies' shared chief officers. As a quid pro quo, the SMJR is said to have used one of the 'Terriers' for its Stratford to Broom Junction trains at times when it was short of locomotives.

Construction of the Edge Hill Light Railway (which had by now become a subsidiary of the Banbury Ironstone Co. Ltd.) began sometime in 1919, with the expectation that that it would be feeding traffic to the SMJR by the end of the year. However construction work was very slow and may have been suspended for a while. This was no doubt because the railway had been started at the time of a post war industrial boom which ended in 1920 resulting in poor economic prospects for a line dependent on iron ore. Further the SMJ, still government controlled, was soon to be nationalised or grouped and the proprietors could now see their investment being compulsorily matured somewhat sooner than expected.

Russell Willmot died prematurely from cancer at his home at Newport, Isle of Wight in June 1920. He was replaced by another engineer on a consulting basis, 74 year old Edgar Ferguson. He had more or less retired from largely mainline line railway appointments, but also had experience of engineering light railways, including the Derwent Valley Light. It is unclear however how much of the physical engineering of the railway was down to him except perhaps the incline mechanisms and the limited upper line works.

During construction some limited traffic had developed when the incline was finished in summer 1922, as the ground through which construction was taking place at the top of the ridge was usable ironstone under a light overburden. This traffic was assessed in later years by a former engine driver, Mr H Green, to have been about 180 tons, or three 60 ton trains, a day. A siding agreement for the junction had been concluded with the SMJ on 1st March and ore was dispatched to Midlands and Staffordshire ironmasters.

The 'self-acting' or gravity worked incline was still only partially completed but plant could now reach the top and a small Manning Wardle 0-4-0ST (1088/1888), named Sankey from its original employment on the building of the Manchester Ship Canal, was obtained from Topham Jones and Co ( who had built the Oxfordshire Ironstone line) in June 1922. The railway started from a small yard (that had previously been used for other ironstone workings) adjacent to the SMJ's Burton Dassett platform (a station that was never recorded in public timetables) , on the Banbury to Warwick Road ( the B4100 ) It then proceeded on slight gradients for some 2½ miles to a fan of sorting sidings at the foot of the 1 in 6 cable worked incline. At the top of the incline the line extended some yards to finish at an uncompleted cutting near the road to Ratley village; near the incline top there was a back shunt and a few yards of track towards Nadbury.

These small beginnings soon came to an abrupt halt. On Tuesday 10 October 1922 a directors' inspection took place in connection with the incline mechanisms. John Brenchley, an old Stephens' construction hand from the EKR, was the ganger in charge of running a rake of wagons and this was set going. However the rake ran away and ploughed into the sand drag at the bottom (not into a Terrier as sometimes reported) and the wagons on the counterbalancing rake came hurtling over the top hitting Edgar Ferguson a glancing, but soon fatal, blow. 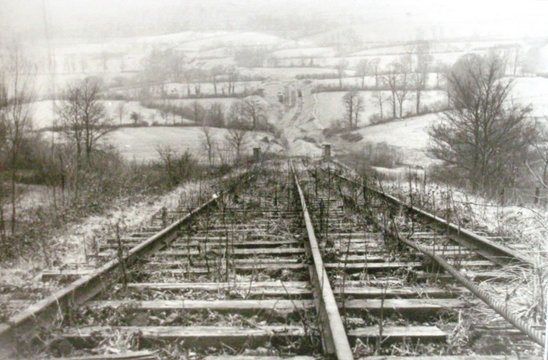 Twenty years later driver Green testified that the incline was not repaired and that traffic ceased. Some small scale activity seems to have taken place later as the Burton Dassett yard foreman's book records a load of ore on 27th January 1925, but in effect commercial traffic ceased in 1922. A solitary caretaker was employed from 1922 till around 1937, but undertook no maintenance and simply kept an eye on matters. At some stage standard gauge stock was assembled in the siding fans at the top and bottom of the incline. Photographic evidence seems to show little change except encroaching vegetation and rot although a few construction tipper wagons seem to have disappeared at an early date and Brake Van No 1 was moved by persons unknown and ran away towards the junction, coming to a halt after about a mile. Tonks records that the Terriers were considered for purchase by the Southern Railway in 1938, but although they were assessed as 'reasonable' later in 1942, they were rejected due to their condition.

Resurrection of the line was considered early in WW2 but, probably rightly, the Oxfordshire Ironstone line was considered adequate to serve the area. Then came the coup de gras; the lower part of the line was requisitioned in autumn for the construction of a vast ordnance depot, now called Long Marston. From 2 furlongs to 1mile 7.8 furlongs the line was taken over and the track and earthworks removed by June 1942 and the rail was reused in the depots .The errant brake van had disappeared into army stock many months before; something the army never admitted, though they later admit to removing some track that they had not requisitioned and did not pay for. There is evidence that they issued a requisition in error for the whole line and stock but this was withdrawn on 4th March 1943. This may have saved the locomotives from early salvage for by then they were hopelessly isolated and the main line connection gone. In 1941 the Ministry of Supply salvage drive was at its height and had they not been thought army property they might have been scrapped then, but by 1943 the USA had joined the war and war equipment was pouring in, lessening the demand for scrap metal.

As part of the process of acquiring the line a full survey was conducted in December 1941. It describes a largely completed railway in its bottom section, though vegetation was getting out of hand and 50% of the sleepers needed replacement; but at the top it was a construction site complete with workmen's huts. The condition of the Terriers at the lower level was thought reasonable, but the hard worked constructors 'muck' wagons and Sankey were scrap.

A set of photos was taken of the line in early 1942 and although there are some changes since the report and rail removal had started it is a useful record taken before most was swept away leaving only the more familiar dumped locomotives and other stock. These were finally cleared away with the renewed demand for scrap that swept the bankrupt nation after WW2 and were all cut up by James Friswell and Son of Banbury over spring and summer 1946. However enough equipment and rail remained to justify its purchase by James Simms (Leamington) Ltd for £1,250 in February 1958 which they had removed in April-September 1957.

The company story did not quite end with WW2. The owners, claiming they wished to take advantage of the boom in UK ironstone production during the 1950s, sought compensation from the MoD to reinstate the bottom end of the line via a deviation. This was probably simply a device to obtain greater compensation and no detailed plans seem to have been submitted. The Lands Tribunal gave the claim short shrift. The Company was finally wound up in November 1957.

The Edge Hill had been a dead duck of a railway from inception but its brief association with Stephens, its almost unique light railway status and the apparently inexplicable retention of derelict ex main-line engines through 25 years of disuse proved an irresistible draw for railway enthusiasts and its legend lives on.